We started last Sunday’s Bible study with this Bob Newhart clip. Or rather, I summarized the clip as we were having internet difficulties. In the clip a woman complains to Bob of her many phobias. What is his advice? He simply tells her to “Stop it!” On one level, this advice seems to make sense, yet we know it can’t work otherwise we could all solve our problems by just stopping.
We could just stop worrying. We could just stop whining. We could just stop self-medicating. We could just stop sinning. Then life would be just great.
We can’t just stop it because even though we think we are in control; we are not.
The psychology concept we looked at is called locus of control. In this theory some people have an external locus which means they believe that their lives are out of their control. They think things are controlled by fate. While these folks tend not to worry or fret, they also see little point in planning or working on change.
The second group has internal locus of control and works from the idea that they can control what happens by working hard. They believe that what happens in their life is controlled by their own actions. While these folks tend to be successful in life, they also have a habit of blaming themselves for things that are not under their control.
I recently heard a scientist say that plants don’t have brains because they can’t move. They have complete external locus of control because there is nothing they can do about their situation, anyway. Animals and humans can move, so we need brains to enable us to make decisions.
The question we discussed was whether or not Christians are internal or external when it comes to control. The answer is not an easy one.
Christians are considered external because we believe that God controls what happens in our life. However, we behave as internal people because we work hard and make plans to change.
I like to think that we are neither external nor internal; we are eternal.
God gave us His law and wrote it in our hearts. We are conceived in sin and proceed through our lives breaking that law on a continuous basis. God sent His Son to live a perfect life and to die and rise again. In this one event we are saved from what we deserve. The control of our salvation is with God and God alone.
But God does not leave it at that. He wants blessings for us in our present life as well as eternal life with Him. He sends His spirit, and through the act of sanctification, works His good in us. We have freedom of will, we have choice, and we can work on things. Anything good that happens in our life is due to the work and blessing of God.
But we have this treasure in jars of clay to show that this all-surpassing power is from God and not from us. We are hard pressed on every side, but not crushed; perplexed, but not in despair; persecuted, but not abandoned; struck down, but not destroyed. 2 Corinthians 4: 7-9 NIV
We try to take control of our life and we create havoc. No wonder we are crushed, perplexed and in despair. God creates a treasure in us and molds us into jars suitable for His work.
Posted by Kim Marxhausen at 8:35 PM No comments:

The power of conformity 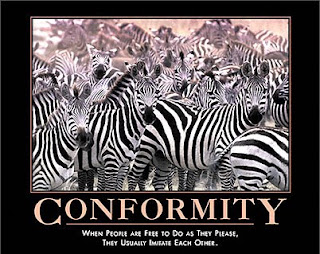 This past Sunday I had the privilege of starting a new Bible study at our church. It is called "This is Your Brain on God." It is my goal, for each week, to examine psychology theory about humans through the lens of Law and Gospel.

The first lesson was on the power of conformity. We began with this vintage Candid Camera clip. It is a short and hilarious clip of Candid Camera people standing the wrong way in an elevator. In each clip the unsuspecting participant turns the wrong way, too. It is funny because we see ourselves in the clip. We know that we often follow the crowd, even if it is going in the wrong direction.

Well, God made us this way, so He must have done it for a reason. Of course, as sinners we always distort God's perfect plan.

A wise friend in the class pointed out that we have three ways to conform; to the world, to God's Will, or to our own idea of what is right.

Experiments done around 50 years ago by Solomon Asch help us to understand several things about conforming:

I appeal to you therefore, brothers, by the mercies of God, to present your bodies as a living sacrifice, holy and acceptable to God, which is your spiritual worship. Do not be conformed to this world, but be transformed by the renewal of your mind, that by testing you may discern what is the will of God, what is good and acceptable and perfect. Romans 12: 11-2 (ESV)

In this verse we see part of God's plan for creating us as conformers. We are expected to conform to the will of God. He gave us the ability to do this. However, we miserably fail at that expectation and instead conform to the world. This gets us into big trouble. We align ourselves with people who encourage us to deny our faith. We follow a group that points us away from God and toward sin.

In this verse we are expected to present our bodies as a living sacrifice. We are not to face the wrong way in an elevator, but to face the opposite direction of the world. Because of the sacrifice of God's Son, we become an acceptable sacrifice. Because of the work of the Spirit we are transformed toward what is good and acceptable and perfect. We face the right direction because He turns us toward Himself. We no longer suffer from the distortion of judgment or the fear of being different. In Christ we can give glory for the difference of being God's child.

Remember the last in the list of what we know about conforming: we are less likely to follow the crowd when we have at least one person facing the crowd with us. Fellowship with believers is a gift of God, also.

I encourage you to be in the Word; to attend church and participate in the sacraments. These are things that cause our faith to grow. I also encourage you to engage in fellowship with believers. Indulge in that particular need to conform! Stand with your believers in worship, study and service.

When that elevator door opens you will be ready to go and serve.