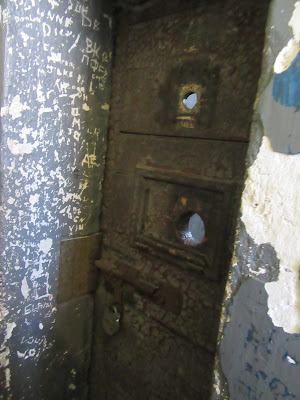 So you, by the help of your God, return, hold fast to love and justice, and wait continually for your God. Hosea 12:6

This is a picture from Kilmainham Gaol a former prison located in Dublin, Ireland. The prison was in operation from 1796 until 1924 and housed many people from rebellions including the Easter Rising of 1916. Touring this museum was a fascinating and sobering experience.

Justice can be a difficult thing to determine in the case of rebellions. Some of those housed in this facility had murdered or plotted murder. Some came back later as part of the new government. When you are on the wrong side of the ruling party it can be hard to distinguish right from wrong.

But, there must be some laws that should be broken under no circumstances. Surely stealing is always wrong, isn’t it?

While the Kilmainham Gaol is quite famous for its political prisoners it was also in high use during the Great Potato Famine of 1845-1850. When we toured the museum we saw where children as young as seven were housed after being convicted of stealing something as inconsequential a loaf of bread. The conditions for incarceration were horrible – sleeping on stone floors with little protection from the elements. It is hard to think that children were condemned to prison for simply answering the pangs of hunger.

When humans, or their children, are hungry or unsafe these conditions become more important than the law. We can see this when we realize that in the case of incarcerating starving  people  for the theft of food, punishment did not deter the crime. In fact, it may have encouraged it as children realized that even with the horrible conditions in the prison they would at least be fed for the duration of their sentence. They could find no other help for their hunger.

Millions of people died or emigrated during this famine. Beyond their suffering the most horrible realization was that Ireland was producing enough food for its people, but the price of the food was kept prohibitively high due to laws that favored absent landlords. These same landlords, when faced with the requirement to help pay for relief simply evicted tenants to avoid the tax. They burned houses and watched children cry as their families were left with nothing. There were no laws to stop these actions. Even the government relief agency felt that the famine was judgement from God to teach the Irish a lesson. They crafted relief regulations that left the poor with nothing and at the same time condemned them for being idle.

It would be nice to be able to say we humans learned our lesson from the atrocities of this famine.  But, we are steeped in sin and insist on repeating those same sins – with impunity – as we protect ourselves and attempt to justify our actions.

When we turn to scripture to find the right recourse for fellow humans who suffer poverty and violence we find no specific solutions, but instead a strong directive: God wants justice for the poor.


I know that the LORD will maintain the cause of the afflicted, and will execute justice for the needy. Psalm 140:12

The tough part is we don’t always know what justice looks like. Which political party is truly concerned with justice? Who knows how to provide justice effectively? Is it about health insurance? Job opportunities? A fair wage? A stronger police force? A visa, green card, or a path to citizenship? I suspect the answer is different for each kind of poverty or hurt.


Cease to do evil, learn to do good; seek justice, correct oppression; bring justice to the fatherless, plead the widow’s cause. Isaiah 1: 17

The Irish did not have justice because the laws, tariffs, and policies of the day prevented them from escaping poverty. They were highly vulnerable even before the potato blight. When the law was used to persecute them it was not used as a curb, a guide, or a mirror – it was used as a club. This use of the law is ineffective.

No, scripture does not give us the answer to poverty or violence. God does not tell us what to do, but He does tell us what not to do. We cannot hide behind man-made law when people are suffering for lack of justice.


Woe to those who decree iniquitous decrees, and the writers who keep writing  oppression, to turn aside the needy from justice and to rob the poor of my people of their right, that widows may be their spoil, and that they may make the fatherless their prey! Isaiah 10:1-2

We should not turn our eyes away from suffering. We should not allow laws, policies, rhetoric, or politics to favor the “haves” at the disastrous expense of the "have nots." We should not use those who suffer as pawns in a political game. We should not be a part of further trauma for people who are helpless and hopeless for reasons beyond their doing. We should not let people suffer and then blame the law or hide behind it.


Woe to you, scribes and Pharisees, hypocrites! For you tithe mint and dill and cumin, and have neglected the weightier matters of the law: justice and mercy and faithfulness. These you ought to have done, without neglecting the others. Matthew 23:23

We do not currently have a potato famine, but we do see people, all over our world – including our country – who are forced to desperate measures in order to find food or safety for their children. God does not tell us to give welfare to the poor or to grant asylum to everyone who asks. He tells us to be concerned with justice. We are compelled to ask: What keeps these families from providing for their children? What can we do to help and how can we avoid making the situation worse? When the law brings justice it implies there was a legitimate choice for behavior.  For the Irish during the famine, keeping their children from starvation was obeying a greater law than man’s law.


Correct me, O Lord, but in justice; not in your anger, lest you bring me to nothing. Jeremiah 10:24

God grants us justice and grace because He knows us, He loves us, He sent His Son to die and rise again for us. The justice we deserve is not what we receive because there is no stronger empathy than agape love.

If we are to know what constitutes justice in the case of the poor, for those who live with violence, who just want safety for their children, we need to stop thinking we know the motivation for their actions. We need to think about their needs and pray for the wisdom to find justice and the courage to ask for it. We need to stop making fear, politics, or the law into a false god.

We need to stop using the law as a club and move the world toward grace because only grace changes things and only grace heals.

Instead of hiding behind the rationalizations of politics, instead of posting, retweeting, or fuming in anger, I will stop, pray, love, empathize, and look for a way to bring justice.


He has told you, O man, what is good; and what does the Lord require of you but to do justice, and to love kindness, and to walk humbly with your God? Micah 6:8

Posted by Kim Marxhausen at 11:27 AM No comments: