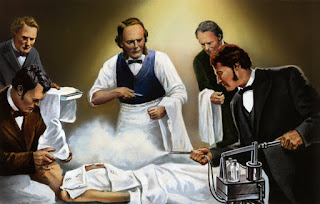 There is a new book out about Joseph Lister and his campaign in the 19th century to make surgery safer. Dr. Lister took Pasteur’s new science of microbiology and applied germ theory to surgery infections. In his day, surgeons thought that infections were caused by bad air and nothing could be done about it. Lister proved them wrong, but not until he weathered a fair amount of criticism.

His fellow surgeons, proud of their filthy, bloody, surgery aprons thought Lister’s theory of bringing dirt into the wound as the cause of infection to be medical heresy. Of course surgeons were not to blame for their patients’ deaths. It was simply the luck of the draw – or at least the luck of the air.

Lister was scorned, ridiculed, and even vilified in the medical journal Lancet as surgeons were warned not to adopt his methods. It wasn’t until he saved the life of two members of the royal family that his preaching against germs started to gain credibility.

“You are the salt of the earth, but if salt has lost its taste, how shall its saltiness be restored? It is no longer good for anything except to be thrown out and trampled under people’s feet.”

“You are the light of the world. A city set on a hill cannot be hidden. Nor do people light a lamp and put it under a basket but on a stand, and it give light to all the house. In the same way, let your light shine before others, so that they may see your good works and give glory to your Father who is in heaven. Matthew 5:13-16

As children of God, redeemed by our Savior, we serve the world as Christian versions of Dr. Lister. Instead of relying on papers written by a fellow scientist, we gain our wisdom from the study of scripture. Armed with this knowledge we work and live in our world, but strive to not be of the world. We see evidence of the germs of sin and try to live a different life as a testament to what can be rather than simply giving in to the natural consequences of sin.

We do not do this for salvation because salvation has already been won for us. We do not do this of our own accord, because without God’s help we can do no good work. We do this because God has saved us and taught us about sin and its consequences. We do this to be salt and light; to be an example to others by preserving what is good and shining a light on what is bad.

Like Lister we often talk to people who do not want to hear. We risk being condemned for our beliefs about the value of life and the value of living a good life. Others are warned to not believe us and we are often scorned and ridiculed.

And like Lister we are not without sin or error in the way we live our lives as salt and light. We have found better antiseptics since Lister’s time and he was convinced that it was a lost cause to try to sterilize the surgery room.  Furthermore, Dr. Lister, the surgeon had germs on him, too. Likewise our lives are filled with sin and grief. Yet, in that grief we know we are forgiven children of God and He uses us to further His ministry.

Lord, make my heart clean and help my words, actions and values be true salt and light in a stinky, dirty, germy world.
Posted by Kim Marxhausen at 1:51 PM

Email ThisBlogThis!Share to TwitterShare to FacebookShare to Pinterest
Labels: salt and light