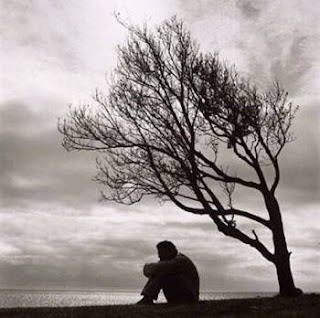 Elijah saw God's power bring the Israelites through a climate drought, but when faced with a spiritual drought brought on by an evil king, Elijah retreated to the barrenness of the broom tree. He was ready to give up, both figuratively and literally. Believing he was the last person alive to hold to faith, he wanted to die in that faith.

God said "no" and gave him something to eat.

God sent him to a mountain. Mountains put you in a vulnerable position and Elijah didn't even have a broom tree for protection. Standing on the mountain we can imagine that Elijah saw the enormity of God's power as he contemplated God's creation. Then as he felt the power of the wind, earthquake and fire, Elijah was viscerally reminded of God's omnipotence.

It is interesting to note that Elijah does not retreat to the cave until he hears God's voice in the sound of a low whisper. His retreat is not out of terror, but out of fear. Elijah did not fear for his earthly life; he feared for his spiritual life.

God's word has a way of killing us; it seeks to kill the old Adam in us. As strong as his faith was, Elijah's old Adam was a lack of faith. He knew there was nothing more that he could do to protect himself and his fellow children of God from the evil that surrounded them. He simply forgot that God did have that power and a plan.

That small still voice was sent to remind Elijah of an unimaginable power.

The graduate program that I am in has stretched me beyond my abilities and I have reached a point of constant reminder that I do not have the gifts to complete this journey. I am not smart enough. I can't do the numbers. I can't do the words. I want to quit while I still have some confidence left.

God says "no" and feeds me through His word and sacraments.

He says that now that I know I am not able to do this on my own I am ready.

Here is some food for the journey:

We need God because we are not enough:


Therefore, behold, I will again do wonderful things with this people, with wonder upon wonder; and the wisdom of their wise men shall perish, and the discernment of their discerning men shall be hidden." Isaiah 29:14 ESV

God is stronger than we can imagine:


God will be what we need:

I can do all things through him who strengthens me. Philippians 4:13 ESV